The (True) Tale of Peter Rabbit

The (True) Tale of Peter Rabbit or Who’s the REAL Victim Here?

Once upon a time, there was a hard-working family man doing his best to make ends meet. Past what we now think of as retirement age, he nevertheless continued to work as hard as ever, cultivating vegetables to feed his family and supplementing his income with odd jobs here and there. His four children (two more died in infancy, as was common at the time) were grown and flown with families of their own, but gathered back at the homestead most Sundays after church for a family meal.

“Now my dear,” said old Mrs. McGregor one morning, “you may go into the garden for some light weeding today but mind you don’t overexert yourself.”

“Your father died far too young and you know what the doctor said about those chest pains.”

“Now run along. I’ve got to see to the washing.”

Then old Mrs. McGregor took the washtub and the basket of laundry and set a large pot to boil on the stove for the whites. 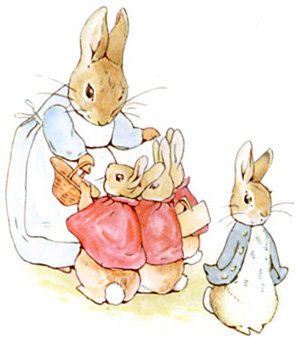 In the meantime, Flopsy, Mopsy, and Cotton-tail, neighbouring bunnies with a healthy respect for authority, went down the lane to gather blackberries.

But Peter, who was kind of a dick, ran straight away to Mr. McGregor’s garden, 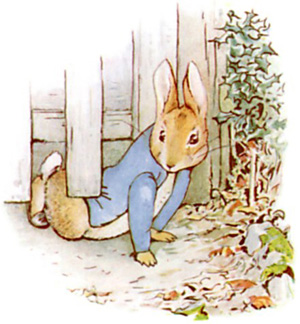 Peter squeezes under the gate.

And squeezed under the gate!

First he ate some lettuces and some French beans – not the beans themselves, mind you – the leaves that collect sunlight to allow the entire plant to grow and bear fruit; and then for good measure he snipped the stems of some of the tallest stalks right in two just to be a jerk. 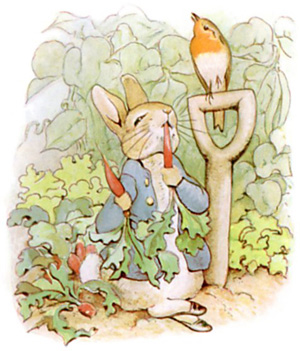 Peter gorges himself on the vegetables Mr. McGregor worked so hard to grow.

And then, feeling rather sick, he went to look for some parsley. 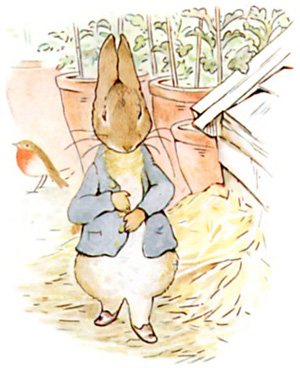 Now sick to his stomach due to gluttony, Peter sets off in search of medicinal plants.

But round the end of a cucumber frame, whom should he meet but Mr. McGregor! 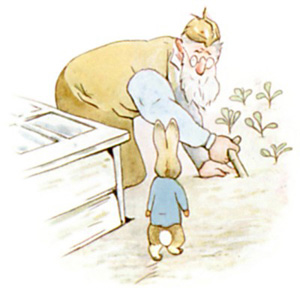 Mr. McGregor, hard at work, is shocked as Peter brazenly walks right up to him.

Mr. McGregor was on his hands and knees planting out young cabbages, but he jumped up, cursing his arthritis, and ran after Peter, waving a rake and calling out, “Stop thief!” 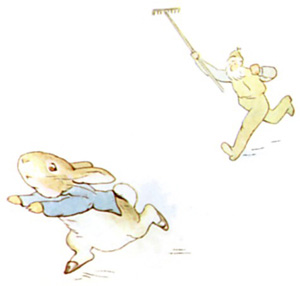 Peter was most dreadfully frightened; but Mr. McGregor even more so. Clutching his chest and wheezing, he continued to run after the rabbit who was putting his winter stores at risk. “What am I to do if this little bastard keeps eating my plants? I’ve already lost two rows of beets; it’s like the asshole KNOWS eating the leaves will interrupt the process of photosynthesis and render the whole plant useless.

He limped along more slowly, stopping to pick up one tiny shoe amongst the cabbages, 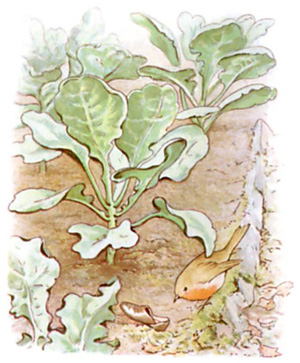 A small robin stares at a tiny shoe amongst the vegetables.

And another shoe amongst the potatoes.

“What the fuck kind of bunny has shoes anyway?” thought Mr. McGregor, recalling how as a young father he had struggled to keep his own family fed and clothed, often going without himself.

After losing his shoes, Peter ran on four legs and went faster, so that I think he might have got away altogether if he had not unfortunately run into a gooseberry net, and got caught by the large buttons on his rather ostentatious jacket. It was a blue jacket with brass buttons, quite new. 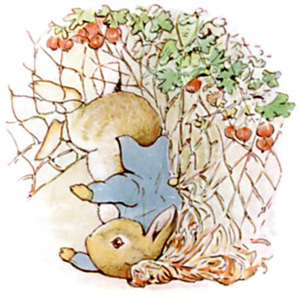 Peter is tangled in the gooseberry net.

Peter gave himself up for lost, and shed big tears; but his sobs were overheard by some sparrows, who flew to him in great excitement and implored him to man the fuck up. 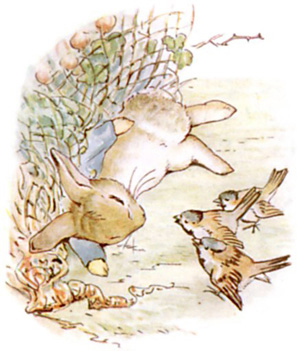 Mr. McGregor came up with a sieve, which he intended to pop upon the top of Peter; but Peter wriggled out just in time, leaving his jacket, and the sparrows, behind him without a second thought, 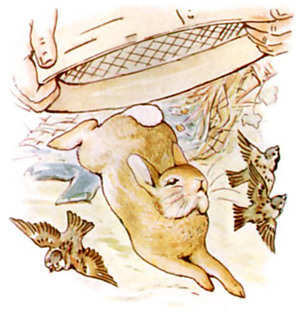 The sparrows scatter in a panic as Mr. McGregor attempts to capture Peter with a sieve.

And rushed into the toolshed, and jumped into a can. It would have been a beautiful thing to hide in, if it had not had so much water in it. 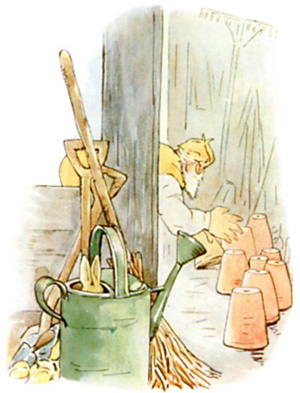 Peter hides in a watering can as Mr. McGregor searches the flower-pots.

Mr. McGregor was quite sure that Peter was somewhere in the tool shed, perhaps hidden underneath a flower-pot. Thinking in desperation of the hard winter projected by his Farmer’s Almanac and the non-existent social safety net of early 20th century England, he began to turn them over carefully, looking under each. Presently Peter sneezed – “Kertyschoo!” Mr. McGregor was after him in no time, 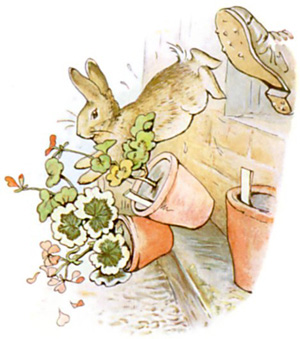 And tried to put his foot upon Peter, who jumped out of a window, upsetting three of Mrs. McGregor’s prize-winning geraniums. The window was too small for Mr. McGregor and his chest was still paining from the exertion. Firmly putting aside thoughts of his own father’s untimely death, he limped back to his work.

Peter sat down to rest; he was out of breath and trembling with fright, and he had not the least idea which way to go. Also he was very damp with sitting in that can.

After a time, he began to wander about, going lippity – lippity – not very fast, and looking all around. He found a door in the wall; but it was locked, and there was no room for a fat little rabbit to squeeze underneath. 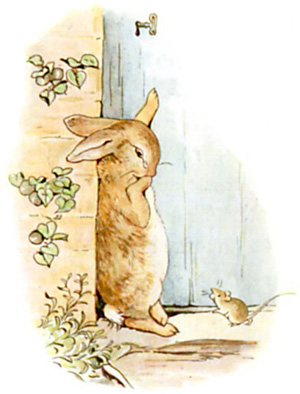 Peter cries as a field mouse watches in disgust.

An old mouse was running in and out over the stone doorstep, carrying peas and beans to her family in the wood. Peter asked her the way to the gate but she had such a large pea in her mouth that she could not answer. If she could, I expect she would have said something like, “Listen, you greedy little pig, maybe if you weren’t so self-involved you would see that by ruining people’s gardens like an asshole you spoil everything for the rest of us who are just trying to feed our families. And now you want my help? GFY.” She only shook her head at him. Peter was once again overcome by self-pity and began to cry. 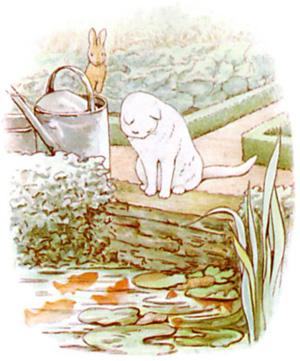 Peter observes a white cat sitting calmly by the side of a pond.

Then he tried to find his way straight across the garden, but he became more and more puzzled. Presently, he came to a pond where Mr. McGregor filled his water-cans. A white cat was staring at some goldfish; she sat very, very still, but now and then the tip of her tail twitched as if it were alive. Peter thought it best to go away without speaking to her; he had heard about cats from his cousin, little Benjamin Bunny. 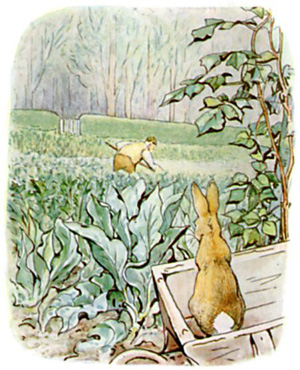 But presently, as nothing happened, he came out, and climbed upon a wheelbarrow, and peeped over. The first thing he saw was Mr. McGregor hoeing onions. His back, which as you may expect was very sore, was turned towards Peter, and beyond him was the gate! 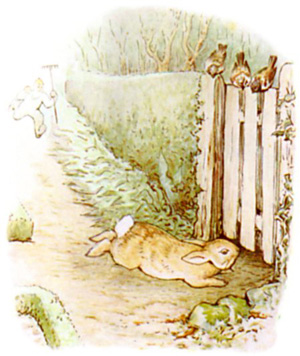 Peter escapes under the gate as the three sparrows he abandoned even as they attempted to help him watch.

Peter got down very quietly off the wheelbarrow, and started running as fast as he could go, along a straight walk behind some black-currant bushes. Mr. McGregor caught sight of him at the corner, but Peter did not care, and raised one tiny bunny middle finger in farewell. He slipped underneath the gate, and was safe at last in the wood outside the garden, the fact that any danger he experienced was entirely of his own making, as he had been explicitly instructed to stay the fuck out of the garden in the first place, notwithstanding. 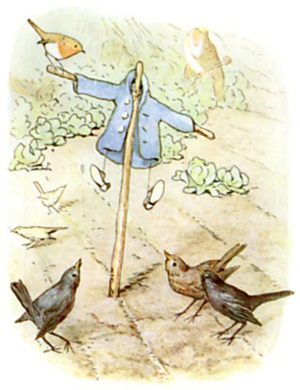 More forest creatures show their disdain for poor Mr. McGregor, as blackbirds and one robin smirk at his makeshift scarecrow.

Mr. McGregor, feeling his age and hoping to hold onto his health and provide for his family for even one more season, hung up the little jacket and the shoes for a scarecrow to frighten the blackbirds.

Peter never stopped running or looked behind him till he got home to the big fir-tree.

He was so tired that he flopped down upon the nice soft sand on the floor of the rabbit-hole and shut his eyes. His mother was busy cooking; she glanced over at her one male child napping while she and girls worked and thought, “Like father, like son.” She wondered what he had done with his clothes. It was the second little jacket and pair of shoes that Peter had lost in a fortnight! Smiling indulgently, she murmured, “Oh well. Boys will be boys!” perpetuating the gender stereotypes that would keep her three daughters tied to their own stoves for the next generation. 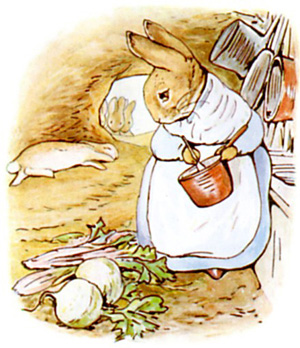 Mrs. Rabbit prepares supper as Peter flops on the floor.

I am sorry to say that Peter was not very well during the evening. His mother put him to bed, and made some camomile tea; and she gave a dose of it to Peter! “One table-spoonful to be taken at bed-time.” 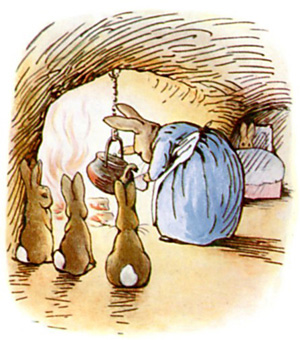 Flopsy, Mopsy, and Cotton-tail wait patiently for their dinner as their mother tends to her male child.

But Flopsy, Mopsy, and Cotton-tail had bread and milk and blackberries for supper, in what was perhaps the single act of fairness to happen to them that day, considering they had obeyed their mother and done all the work. As they ate, they thought how lovely it was to have just one night off from their brother’s endless whining and hoped that he might stay in bed all day tomorrow too. 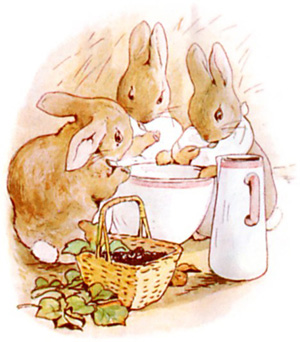 Three sisters, finally able to eat the dinner they worked so hard to provide, discuss the fixed gender roles they are expected to inhabit in angry whispers. Cotton-tail’s ears sag as she considers the possible reactions if she came out to her sisters right now.

3 thoughts on “The (True) Tale of Peter Rabbit”

"The (True) Tale of Peter Rabbit" by @karynpickles