I picked up a really lovely book a while back at the Grand River Book Store at the Five Oaks Retreat Centre outside of Paris, Ontario: God’s Dream, by Archbishop Desmond Tutu and Douglas Carlton Abrams. 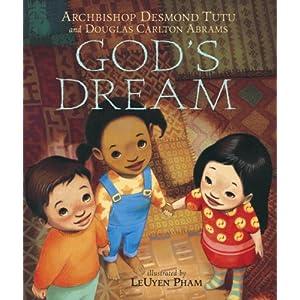 It’s fitting that I picked it up at the beginning of February, Black History Month, as telling Ben and Molly about Archbishop Tutu sparked a conversation about apartheid and racism. Ben was shocked at the idea that anyone would think that people should be treated differently because of what they look like, citing examples of his friends at school who had different-coloured skin but were just the same as him. We also talked about Archbishop Tutu’s own experience of growing up in South Africa during apartheid and witnessing and experiencing the mistreatment of black people by white people, but always advocating for both change and forgiveness.

God’s Dream comes in both a large hardcover edition with a dustjacket or a smaller board edition; I chose the board book in the interests of durability. The language is simple and the pictures bright and appealing, making the book suitable for children from infancy to school-age. In 28 sentences and 15 illustrations, the book covers love, racism, ageism, diversity, apology, reparation, forgiveness, theism, and universality, delivering as its core message that we are all God’s children, worthy of love and respect, and called to love and respect one another.

The engaging illustrations depict cultural and religious diversity (sadly, as with so many children’s books, it is missing pictures of children with disabilities) and the universal message makes the book relevant to and suitable for families with any theistic worldview not specifically Christianity (or organized religion at all): You could read the story to a group of Muslim, Christian, and Jewish children, for example, and they could each recognize their faith’s core message.

God’s Dream ends with the message that when people fulfill God’s dream by loving one another, “God smiles like a rainbow,” and ends with a picture of a rainbow made up of children’s handprints.

Ben and Molly immediately asked if we could do a craft like that, and I suggested that in the interests of size we try fingerprints instead. We started with rainbow-coloured paints in an egg carton…

..then took turns painting each others’ fingers with cotton swabs…

…and stamped the painted fingers on the canvas to make the rainbow.

The finished product was a complete team effort and is now proudly displayed on the playroom wall.

Have you read any particularly meaningful children’s books lately? What would you recommend?

PINK! is the story of a penguin named Patrick who wakes up one morning to discover that he has turned pink. When he finds himself being teased at school, he decides to go and live with the flamingos, but finds that he doesn’t fit in there either. He returns home where he finds that his friends and family are happy to have him back and want to hear all about his adventures.

It’s a really nice story – well written, doesn’t hammer the points home over and over as some children’s books are wont to do, and was simple enough to keep Molly interested with a meaty enough story to engage Ben as well. In fact, at bedtime last night we read it twice. In a row. And I still like it. Can there be a better recommendation than that?