I’m so excited to announce that I have just been given my first, and most meaningful, blogging award!! 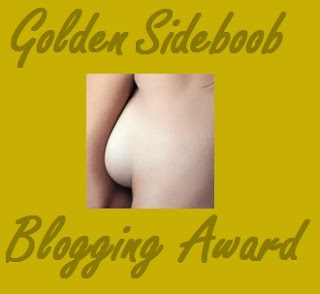 Created and curated by Lizzi at Considerings, The Golden Sideboob Blogging Award has now been in existence for a staggering TEN hours, although it has been in the works for much longer.

This prestigious award is offered to a select number of bloggers who meet the award’s standards of excellence with consistently perky, titillating, and well-rounded posts with frequent *flashes* of insight. No nipple and diming here – to earn a Golden Sideboob, your blog must have an areola of brilliance.

I am honoured to now be counted among the elite group considered deserving of said…uh…honour. What else can I say that hasn’t already been said much more eloquently by famous people who have come before me? I turn to Anne Hathaway, whose speech at the 2013 Academy Awards truly sums up my feelings right now:

I will do my best to continue to be worthy of this award. Thank you so much, Golden Sideboob Nomination Committee!