I’ve been seeing this post about a daughter’s questions about her mom’s makeup in my news feed recently, and it’s made me think. Christine Burke describes how her daughter’s simple question made her see herself through a 7 year-old’s eyes and examine why she spent so much time and effort contouring, highlighting, plucking, cleansing, and otherwise enhancing her looks.

Does wearing makeup make me a bad feminist?

END_OF_DOCUMENT_TOKEN_TO_BE_REPLACED

I’m not all doom and gloom, privilege/oppression/whiteness/and-other-social-work-buzzwords. There are some good options out there if you’re willing to do some digging (or some sewing).

I have a collection of dolls/hand puppets from when I was a teenager called “Treehuggers.” These were, in my opinion, the best rag dolls ever made. You could buy from the catalogue or place a custom order, choosing gender, eye shape (from a selection of buttons), hair colour and texture (yarn – straight, ravelled, dreadlocked, long, short), and skin colour. They also encouraged fine motor development through tie-able shoelaces, button fastenings on the clothing, and  the fact that they could be used as dolls or hand puppets, making them excellent toys for children with special needs. Unfortunately, except for the odd Ebay listing, you can’t get them any more. If anyone reading this has mad sewing skills and wants to go into business, let’s talk!

My collection of 4 Treehuggers dolls, each with different skin colour, hair colour and texture, and eye shape and colour.
©PicklesINK 2012

Cabbage Patch Kids are still available in black or white and as boys or girls. At the lower price point they have unfortunately gone to the glossy doll-hair but you can get the “original” version through the website for a price. Lots of the older ones are available in thrift stores though.

Ben and Molly’s babies:
From left, Lissaba, Melissa, Alyssa,
and baby with no name.
©PicklesINK 2012

There is a line of dolls called “Hearts for Hearts Girls” that is reasonably affordable. Each doll represents different country and comes with a story book, friendship bracelet, web access code, and donation through World Vision to help girls in her country of origin. Unfortunately, in Canada they are exclusive to Walmart, which may turn off some consumers. They only have girls, but that does fit with their concept.

I also quite like Groovy Girls – contrary to their name, there are boy dolls, and they come in many different skin tones and hair colours and textures (yarn). They have been around since 1998, so they would probably be available in second-hand shops as well for more variety. We have a great collection that was given to Molly by my cousin.

Online, by asking my good friend Google to find me “ethnic dolls” I also found the following intriguing websites (below). Sadly, the first entry that turned up in my search was toysrus.com, offering “ethnic dolls, including Dora the Explorer, Barbie, and SpongeBob.”

My World Ethnic Doll Clothing, based in Toronto, Ontario, was founded by a Canadian teacher who wanted to provide parents with the opportunity to purchase doll clothes that represented their cultures. This website provides a wide variety of multicultural fashions, male and female, and androgynous dolls in 4 different skin tones. Prices are shockingly reasonable.

Kids Like Me, based in the UK, provides educational toys, books, and resources that embrace diversity, special needs and inclusion. Their online catalogue offers a variety of reasonably-priced multicultural rag dolls (boys and girls).

And finally, oddly enough, IKEA has the coolest collection of multi-ethnic, unisex, and extremely reasonably priced doll stuff anywhere…which I suppose should not be particularly surprising since they have for some time been ahead of the game when it comes to providing unisex (ie. neither pink nor blue) toys such as kitchens and toolbenches. The LEKKAMRAT series includes 3 soft doll options (different skin and hair colours and facial features), 4 different sets of outfits, and a bathtime set in which the bathtub is blue. BLUE! IKEA also offers a wooden doll bed with blue sheet and rainbow-striped cover – and listed as “related products” to the doll bed are the children’s “10-piece coffee/tea set,” “5-piece kitchen utensil set,” and “toolbelt with soft toys.”

Photo of LEKKAMRAT dolls in various outfits
from website of Kimberley Bezaire, PhD

Whether you are searching for a doll that looks like your own child, trying to find resources for your classroom or daycare, or looking for ways to promote diversity in your own home, there are definitely options available – in fact, more than I even realized when I started this post.

A good friend posted this article to my Facebook timeline the other day, asking what I thought of it:

According to the article, Arklu, the company that makes ‘Lottie dolls’ “worked with two academics to work out the exact proportions of an average healthy 9-year-old. The scaled-down dolls don’t have breasts or super skinny waists, although their heads and eyes are enlarged.”

I had skimmed the article when I first came across it and remember thinking “Meh…cute dolls, nice concept, good price, but it’s been done,” but being asked specifically for an opinion compelled me to look a little deeper and I wound up tossing and turning all night thinking about my response, which was this:

As options for young girls go, I don’t hate them. I don’t think they will do any harm (or any more harm than any other doll, but I’ll get to that) but I don’t know that they’ll do the good the creators are hoping either. I know we as a society have heaped a lot of vitriol on Barbie, but I believe she is a symptom of our warped ideal body image, not the cause. When I was a little girl playing with Barbie, I saw her as a doll, not an image of an ideal woman. I never thought I would grow up to look like Barbie…I also never thought I would grow up to live in a Dream Castle (TM) or drive a bubble-gum pink motorhome. 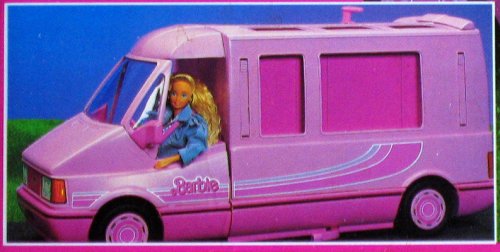 Barbie in her Magical Motorhome (1990)

Aside from the weird physical proportions, Barbie (bearing in mind, I haven’t actually seen any of the movie/TV tie-ins, so I’m basing this solely on the commercials and characters from when I was a kid) is actually not unempowered, as female characters go. Except for that “Math is hard! Let’s go shopping!” talking Barbie debacle, Barbie usually represents an independent and successful woman – she has been a doctor and teacher, owns her own home, car, and motorhome, and though Ken shows up occasionally, he’s generally an unnecessary add-on. Yes, there is plenty of gender stereotyping (ie. Dr. Barbie spends all her time delivering cute babies and clearly has a weakness for short skits and pink stethoscopes , but the Lottie dolls obviously have not made clear inroads there either. 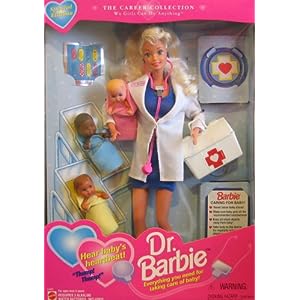 On the other hand, these dolls do fill a void in the market – there are lots of baby dolls and lots of grown-up dolls (Barbie), but the only in-between little girl dolls traditionally have been TV characters like Dora or Doc McStuffins, or are prohibitively expensive (American Girl dolls, china dolls) so it is nice to have an affordable option that kids can personalize and relate to. In terms of the not wearing makeup, heels or jewelry, it’s a nice hook but to me the faces still have that same “glamour” look that defines all of these giant-headed, small-bodied dolls: Huge eyes, long straight hair, and perfect skin. Conclusion of the body-image section of my comment: I don’t think that these dolls are going to solve any problems, but they aren’t really going to create any new ones either.

Putting the body image piece aside, further study of the Lottie dolls brings up several other issues for me. First, on reading her website, we see that “Lottie” is clearly not suffering from any lack of funds, since her favourite activities include “pony flag races” and walks in “English country gardens” with her (presumably pedigreed) dog, “Biscuit the Beagle.” Lottie may be shaped like the average 9-year-old girl, but she seems to enjoy a very different class of leisure activities than the average girl who will be playing with her.

Second, and this is common to the whole “fashion doll” and for the most part the “doll in general” market – where are the boys? When are we going to meet Lottie’s brother Larry, who, I don’t know, loves playing soccer with Lottie and her friends when they’re finished with their English country garden picnics and fox hunts?

And third, and this is my very biggest issue – Traditionally, dolls are white. This is a HUGE problem for non-white children. There was a study originally done in the 1940’s and then re-created in 2006 by a high school student that demonstrated that when given 2 baby dolls, one black, one white, black children (boys and girls) overwhelmingly preferred the white doll and attributed positive attributes to it (“pretty,” “nice”) and negative attributes to the black doll (“bad”), and also identified the black doll when asked “Which doll looks the most like you?”

That bears repeating – the study was done first in the NINETEEN-FORTIES and repeated in TWO THOUSAND AND SIX and showed NO CHANGE in attitude. Please take 7 minutes and go and watch the extraordinarily powerful documentary by Kiri Davis. I’ll wait.

When I was about 3, Cabbage Patch Kids came out, and they were the first mainstream, popular manufacturer to actually offer a selection of black dolls.

Now manufacturers are offering more selection when it comes to non-white dolls (or at least, black dolls – there is still very little out representing other ethnicities) but even those options only change the skin colour – they still have idealized, typically “white” features such as small, pointed noses, and long, smooth, glossy, straight hair, and these Lottie dolls are no exception (here’s that picture again). Does this look to you like the “average 9-year-old girl”?

Consider the fact that a black meteorologist named Rhonda Lee was fired this November for responding – politely – to a viewer’s FB post saying that her short-cropped hair made her look like a “cancer patient” and she should wear a wig to avoid upsetting viewers (the viewer than continues on to say that while he is not racist, the world has “certain standerd [sic]” and asks, “if you come from a world of being poor, are you going to dress in rags?”);

while at the same time a white news anchor, Jennifer Livingston, was hailed as a hero worldwide by responding to a letter saying that she should lose weight in order to be a better role model with a 4-minute on-air segment (she was interviewed by, among others, Ellen, Katie Couric, and Glamour magazine).

Rhonda Lee’s viewer is right – our world does have certain standards which have been set by public opinion and which are reinforced every day by, among other things, the dolls that are available for our children to play with. If Arclu wants their Lottie dolls to help to dismantle and reinvent these damaging standards, they have a little more thinking to do before they get to the heart of promoting positive self-image in the young girls (and boys) who are really at risk.

Do you like or loathe Barbie? Would you buy a Lottie doll?